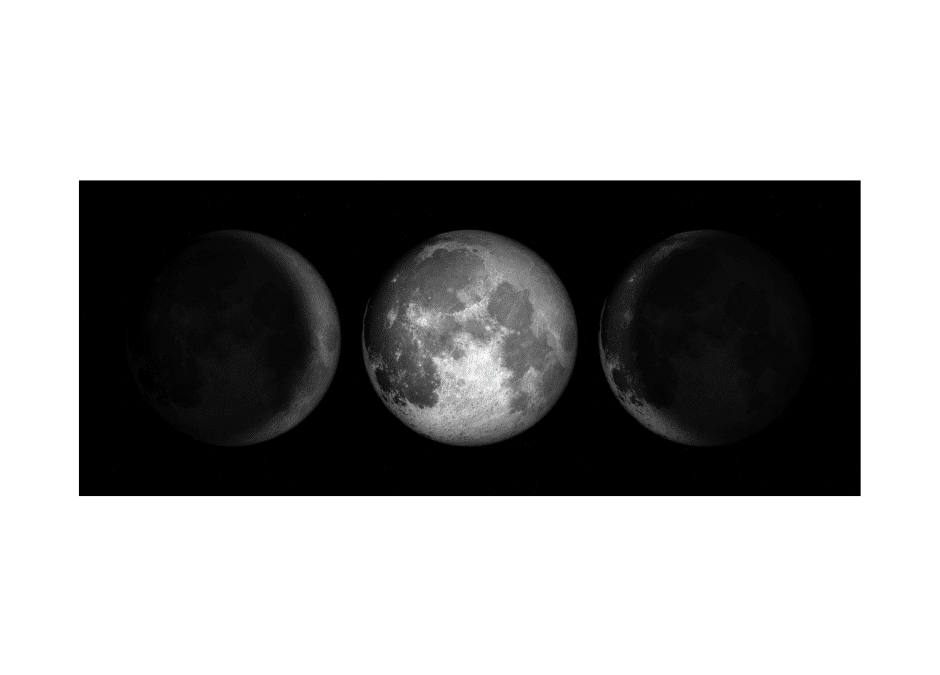 The Triple Goddess is a trinity of three individual aspects representing the Maiden, Mother and Crone which are also associated with the Earth and the Moon and its cycle – waxing, full and waning.

As the Earth she is associated with grounding and physical energy needed for growth and prosperity as well as domesticated animals, fields and crops. Each aspect is also associated with specific seasons.

As the Moon, she is Goddess of the heavens and rules the oceans and tides, as well as the menstrual cycles of women. She identifies with our emotions, intuition and wisdom.

She is the waxing moon, a time of growth and expectancy and awaiting the moon reaching its fullness.

She is dawn, sunrise and Spring time. She is new life, fresh, beautiful and full of potential.  She represents youth, innocence, self-confidence, independence, discovery and exploration, creativity and self-expression.

As the moon becomes full so the Maiden becomes the Mother, the giver of all life and Earth’s bounty.

She is midday, she is Summer. She represents the most fruitful time and abundance; crops are flourishing and animals are growing to maturity. She represents fertility, nurturing, protection, responsibility and adulthood. The Mother Goddess is considered by many to be the most powerful aspect of the trinity.

The Crone (also known as the Dark Goddess)

She is the waning moon, a time of darkness in the night sky. She represents the childbearing years as past.

She is dusk, sunset and night time, she is Autumn and Winter, she is slowing down and coming to the end of the season. The Crone is wise; she represents ageing and endings, death and rebirth, guidance and visions. She reminds us that death is part of the cycle of life.

The Triple Goddess is a diverse and complex expression of the divine feminine. By connecting to her three aspects, she provides continuous opportunities for spiritual growth and learning. The concept of a triple deity can be traced back to ancient civilizations from Egypt, Greece, and Celtic beliefs to name just a few.

Here are some examples of Triple Goddesses:

Egyptian – Isis was the daughter of Geb the Earth God and Nut the Sky Goddess and so was both heaven and earth combined. She gave birth to Horus, the Sun God and together they created all life on earth. Isis is Mistress of magic and knows all; she can heal the sick, grant fertility, she offers protection to all seafarers.  She was even able to bring back the dead, she represents rebirth and eternal life. She was beloved by all, the poor and the rich.

Greek – Hecate (sometimes spelled Hekate) was a Greek goddess who ruled over the realms of earth and fertility rituals. She was a goddess of puberty, menstruation and childbirth.

She evolved to become a goddess of magic and sorcery. She was honoured as the mother goddess, due to her protection of the vulnerable such as children, herdsmen, hunters and warriors in battle. However Hecate was not known for her nurturing or motherly protection rather she would bring vengeance upon those who would cause harm to those she was protecting.

She was also the goddess of ghosts and the spirit world which connects  her to the Crone aspect.

Some would say that Hecate is not a Triple goddess, but see her only as a Crone, and indeed many do worship her in this form.

Celtic – Brigid is goddess of smithcraft, poetry and healing.  She is connected to light, inspiration, and all fire skills. The skills and knowledge associated with smithcraft was considered to be magical and powerful.

Imbolc one of the four Fire Festivals is dedicated to Brigid, where she is in her Maiden aspect representing youth, growth and new beginnings.

In ancient Celtic society, bards held a position of esteem, second only to kings. Bards were the keepers of stories, poems and songs which they performed live. These would be about the events of the day; they would also recite ancient lore and tales of wisdom whenever it was needed. She brings fertility to the land and its people and is closely connected to midwives and childbirth. Brigid is also connected to sheep and the lambing season, as well as cows. Brigid was known for her healing and generosity towards the poor.

Whether you honour goddesses as a Triple Goddess, or simply the Maiden, Mother, Crone archetypes, finding a connection that suits your personal needs can provide a more rewarding spiritual connection in your worship of the moon cycles, seasons and the earth herself.

Wiccans may worship the Maiden in the form of the Greek goddesses Persephone and Artemis, the Celtic Rhiannon, or the Nordic Freya, amongst others.

Goddesses who represent the Mother include the Greek Demeter and Selene, the Roman Ceres, and the Celtic Danu.

The Crone is often represented by goddesses associated with death and the underworld, such as the Greek Hecate, the Russian Baba Yaga, the Celtic Ceridwen and the Cailleach.

Gaia was known as the life force from which all other beings sprang, including the earth, the sea and the mountains. Gaia is worshipped by many Wiccans today as the earth mother herself. Giving thanks to Gaia can be a good place to start. You may find yourself drawn to a particular goddess, which can also change with time. The Wiccan path is a personal journey, pick and choose what it is that you need at the time. Do what feels right for you.