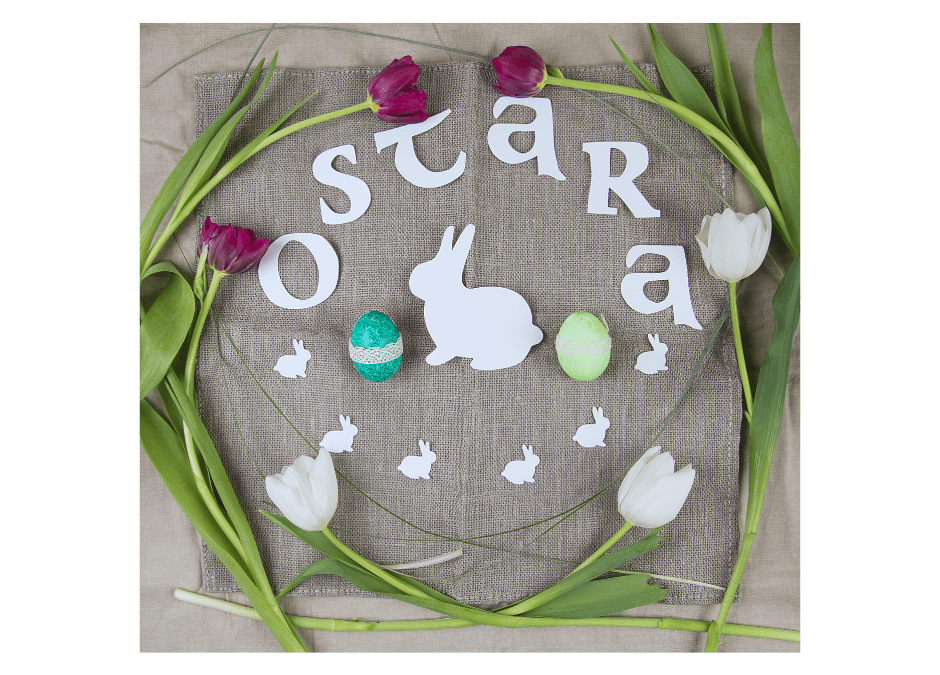 Ostara is another name for the Spring equinox, it heralds the birth of Spring and the end of Winter. It is a time of perfect equilibrium, dark and light, cold and warmth, masculine and feminine. It is a time when the sun is becoming stronger and warmer, the days are lengthening, we can be sure that warmer weather is on its way.

Ostara follows on from Imbolc and focuses on balance and renewal. Now is a good time to fully take on any intentions and dedications set during Imbolc.

Colours to use are pastel colours, spring green, solar colours, orange, yellow and red.  Foods to enjoy eggs, quiche is good as it is round and golden, spring greens, asparagus and other seasonal foods. Always use your best dishes to celebrate the Festivals, (they don’t have to be expensive, just special to you), use your sun candle and place in the centre of your table, use spring flowers such as daffodils, crocus or tulips. Take time and bake your favourite cake, use chocolate if you want.

Ostara – Goddess of the moon, associated with hares, birds and butterflies.

Ostara is a maiden goddess; she is goddess of fertility and rejuvenation.  Seeds sown at Imbolc are now beginning to germinate and grow, the warmth and energy begins to flow, and spring is here once more. Now is a good time to start planting your garden (if the frosts have passed), or use plant pots if it is still too cold or if you do not have a garden.

There are many stories about hares in folklore and this is one about Ostara.

Each year Ostara arrives to herald the arrival of spring. One year she was late and winter carried on a little longer. A little bird was eagerly awaiting her arrival but sadly the cold winter weather eventually became too much and the little bird lay dying in the snow, just as Ostara arrived. She immediately cradled the little bird in the hands and was able to save his life. Unfortunately his little wings had withered with the cold. Full of sadness that he could no longer fly, Ostara changed him into a snow hare and from that day on he became her companion.

She also gave him the gift of speed so that he may escape from those who hunted him.  And in honour of his original incarnation as a bird, she gave him the ability to lay eggs.  He was however only permitted to lay these colourful eggs once a year to celebrate the arrival of Ostara herself.

Eggs of course are symbols of new life, fertility and rebirth.

Hares, Rabbits and the Moon

In numerous traditions, hares were archetypal symbols of women, femininity, goddesses, magic, fertility, longevity, rebirth and abundance as the hare can conceive whilst already pregnant.

It is said that, Hare is the messenger of the Great Goddess, moving by moonlight between the human world and the realm of the gods.

The association of rabbits, hares, and the lunar cycle can be found in numerous cultures all over the world.

Figures of hares or white rabbits are commonly found at Chinese Moon Festivals, where they represent longevity, fertility, and the feminine power of yin.

The moon and the hare were believed to die daily in order to be reborn – so the hare is a symbol of immortality.

Seeing a hare gazing at the moon was believed to bring growth, re-birth, abundance, new beginnings and good fortune.

Hares have shorter front legs and so by using their long powerful hind legs are able to run fastest when going uphill,  appearing to have supernatural ability to out run larger and stronger animals. This may be one reason why they are also thought of as being trickster figures and are capable of outwitting their foes.

Ostara is a wonderful festival and a time to really feel the magic and wonder around us, to marvel at new life springing up. Spend some time outdoors each day to witness the changes; though they may be subtle they are real indicators that the sun is returning and the wheel turns once more …